History and places to visit in Perge

The ancient city of Perge was founded on the alluvion plain formed by the river Aksu (Kestros), about 15 km. from the sea. It is 18 km. far from Antalya. In the ancient age, the river Aksu allowed the boats to come very close to Perge. 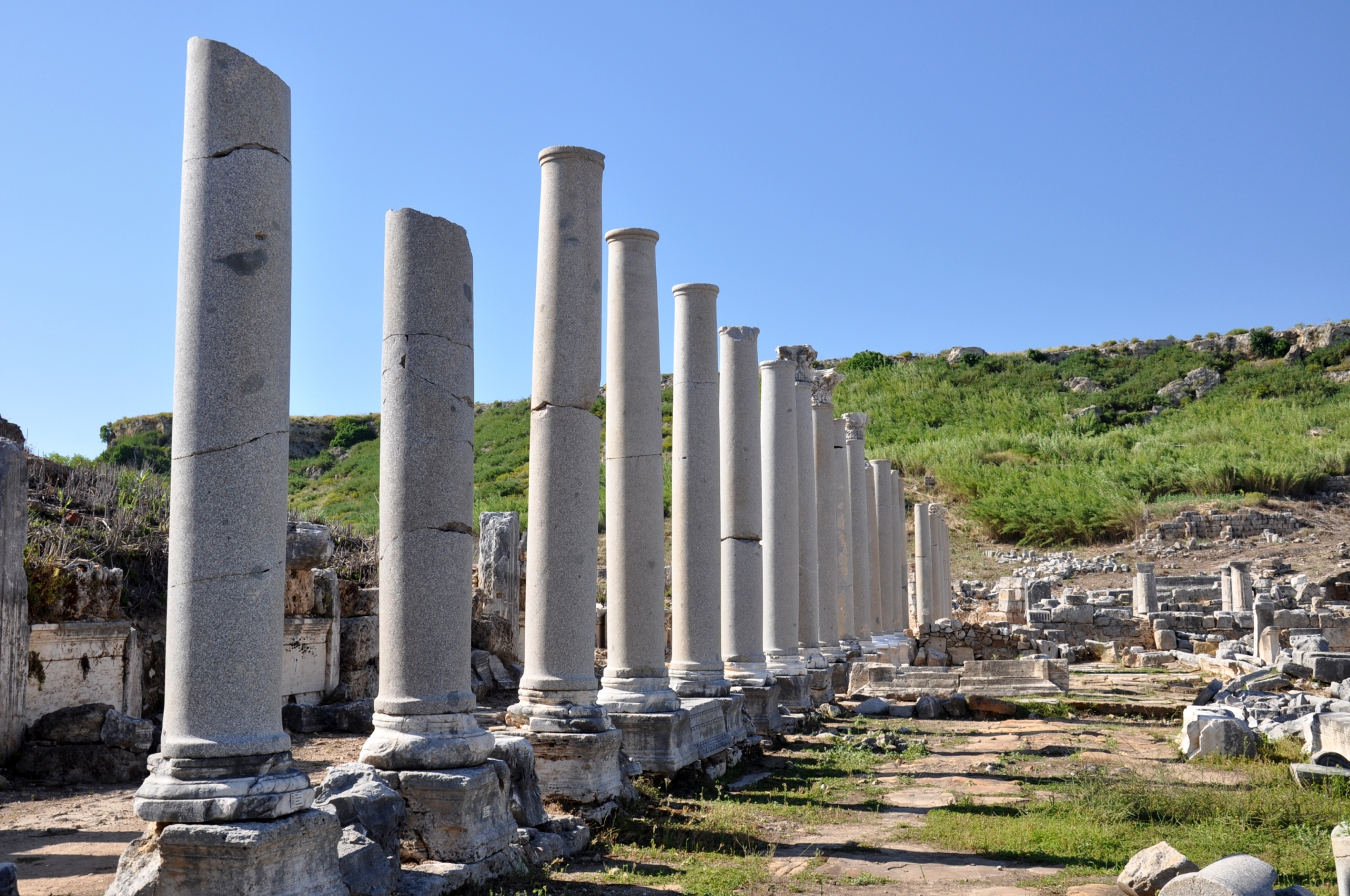 Like the other cities of Pamphylia, the foundation of the city of Perge has a history in the twilight, mixed with the myths. It is known to be colonized during the “migration of the Western tribes” (around 1200 B.C.), which started after the legendary “Troia wars”. It is also known that the settlers led by the legendary leader of the Akhaian settled here. This leader is mentioned as “Muksus” (or Muksas” in Hittite sources, and as “Mopsos” in Hellen sources. Along with Mopsos, the names of the legendary leaders like Kalkhas, Riksos, Lykos, doctor Makhaon and Minyas, etc. are also mentioned. Pamphylia and the surrounding region was called “Mopsopia” during the early days. However, that the name “Perge” is not in Greek but in Anatolian languages reveals the fact that there was settlement here before the colonization. It is understood that the first settlers in the region and in Perge were of the “Luwi” origin.

Places to visit in perge 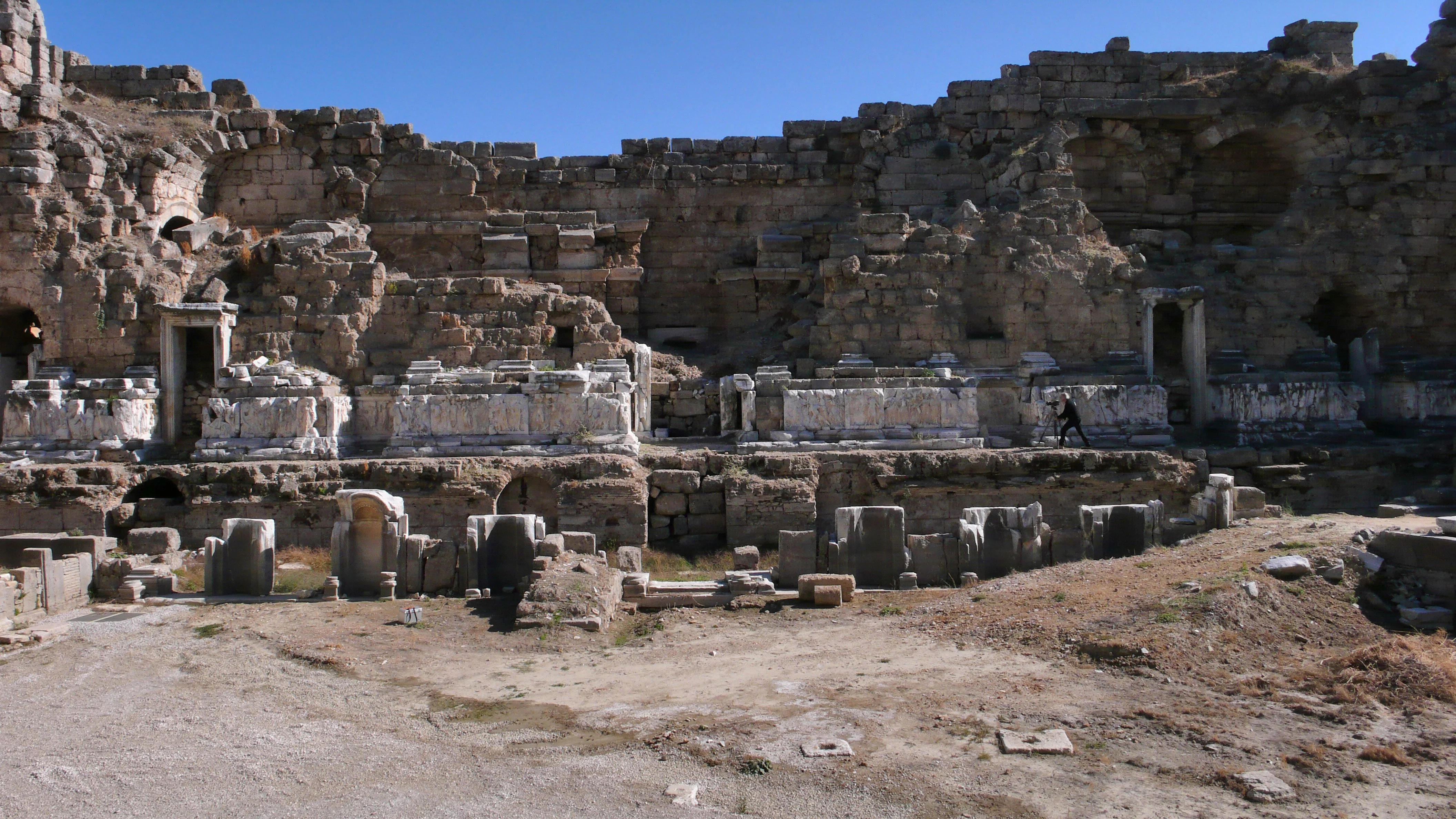 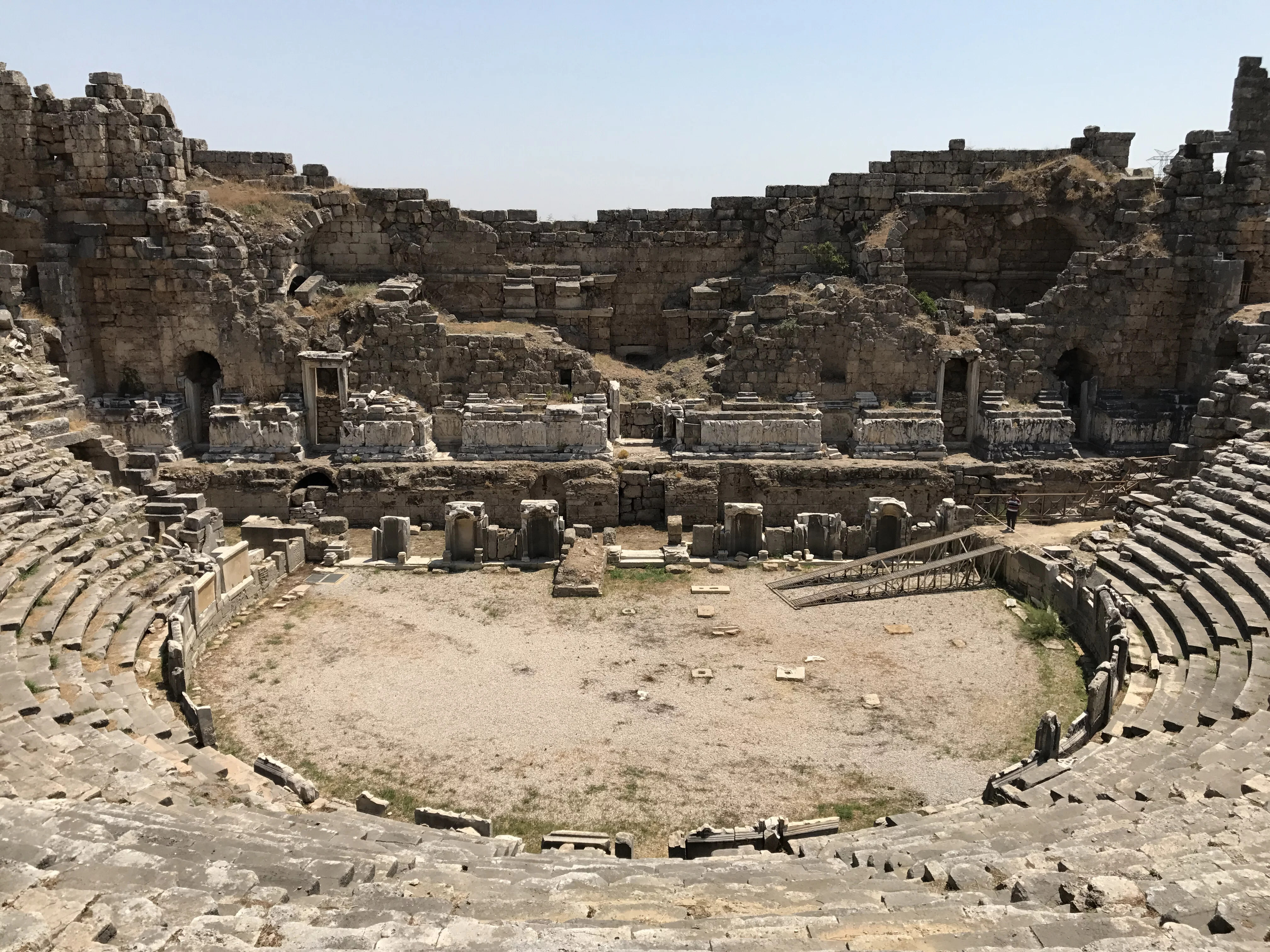 It is a Greco-Roman style theatre, built with its back leaning against the hill. In other words, it was erected before the Roman period, but works of repair and modification were performed later by the Roman.

As in the Greek style, Cavea was separated from the stage structure by the uncovered entrance sections (parados). However, the fact that the passageway (diazoma) dividing the cavea into two was seated on a gallery, which also provided entrance here from outside, and that the stage structure had multiple floors reflect the Roman character.

Having a seating capacity of 15.000 spectators, the cavea was divided into two by a diazoma. There are 23 sitting rows in the upper section, while the lower section hosts 19 sitting rows. As an advantage of the theatre’s location on the slope of the hill, the spectators were able to enter from the outside directly to diazoma, through an arched passage (vomitorium). There is a gallery on the back section of Cavea (Roman style), which connects to cavea by means of arched passages.
The flat place reserved to the orchestra is separated from the cavea with a 1,80 m. high wall. It is obvious that this was done to protect the spectators during the gladiator and wild animal fights of the Roman period.

The stage building is multi floored, with the lowest floor being a 50 m. long gallery. The date of construction for the stage building is 2. century A.D. Its side facing the spectators was richly decorated with five niches between the columns of each floor and the statues inside these niches. The statues decorating the walls of the theatre and the friezes bearing the description of mythological scenes are today exhibited in place and also in Antalya Archaeology Museum.

Five gates lead from the staff building (scenae) to the stage. The outer back wall of the stage building was later decorated with korinth style columns and niches, and it was thus converted to a monumental fountain (nymphaion).

Perge stadium is the one which has survived through the present day in best conditions, among the stadiums in Anatolia. Having a race field of the sizes 34 x 234m., this building with a capacity of 12.000 persons dates back to 2. century A.D.

The northern edge of the building was round and its southern edge houses a monumental gate. This gate is now in ruins. A 1.90 m. long wall extending from end to end separates the arena from the section reserved for the spectators. There are thirty interiors aligned side by side under the sitting places along the long eastern edge. One in every three interiors has an entrance to the arena. The rest of the interiors functioned as the shops. There are writings at the entries of these shops, showing the names or the professions of their owners.

The gate and the city walls on both sides of it date back to the 4. century A.D. The walls in the other districts of the city date back to an earlier time, 3. century B.C.

These Hellenistic period walls and their towers were made of cut stones, and those in the eastern side are fairly undamaged. There are windows on the upper floors of the towers.

The first of the nymphaions of the Perge city is situated at the southern gate, in “Septimus Severus Forum”. It was dedicated to Artemis Pergaia (Artemis of Perge) and the emperor Septimus Severus (193-211 A.D.). Having a 14 m. wide large pool and two small semi circular pools in its front side, the two floored surface of this monument is decorated with columns and niches. There were statues inside these niches. The embossed designs and statues which were excavated here are today exhibited in Antalya Archaeology Museum. There is also a 2 x 3m. sized niche. The second monumental fountain of the city is located on the foot of the hill of Acropolis, at the end point of the road extending from the south towards the north. It dates back to 2. century A.D. The stairs which begin at the two arched passageways on the front side of the fountain lets one reach Acropolis. Its richly decorated front side has two floors, each housing three niches. There are columns between the niches. The central niche houses the statue of Caestus”, the god of the river. The water flowed down like a waterfall inside a gutter under this statue to fill the pool of the fountain, and from here it discharged into the canal on the main road which extended all along the city.

One of the baths of the Perge city is located next to the southern gate, and to the west of the “Septimus Severus forum”. A propylon, which opens into the forum provides entry to the baths’ palaestra. Propylon is built on a marble platform and it has eight columns. It bears interesting decorations. Building of the baths houses the sections and the rooms of the classical Roman baths, withwide windows on its western side. There are marble pools of varying dimensions inside the Frigidarium and Calderium. Some of the statues inside the niches on the walls of the rooms and halls have been found and they are today exhibited in the museum. There is another baths building in Perge, located near the western gate. Dating back to 3. century A.D., it has a wide courtyard and five sections.

Southern gate of the Hellenistic period, and the additions belonging the Roman period

Being a perfect sample of the stone carving art, the southern gate of the Hellen-Roman period is comprised of a courtyard with a horseshoe shaped plan, which is protected by two cylindrical high towers on both sides, and an monumental gate appended to the courtyard in the direction towards the city (north).

The 10 m. high towers belong to the Hellenistic period, and the courtyard and the monumental gate with three arches were added in the Roman period. The area between the late period gate and the old gate is also called “Septimus Severus Forum” Inside of the courtyard is embellished with two rows of niches having round arches. There were columns between these niches, and statues were places inside them. The bases with inscriptions of some of these statues were found. (These belong to the persons titled “city’s founders”.) The bases of the statues belonging to the legendary Mopsos and Kalkhas, also to the father Plancius Varus and his son are among these.

Agora and the round building

Agora is situated next to the gate of the Hellenistic period. It has a square plan sized 65×65 m (75x75m., with outer dimensions taken into account). It is made of a courtyard surrounded by the shops and the stoas having Korinth style columns.

The grounds of some shops are decorated with colored mosaics. Located to the south of Agora is a toilet (latrina). The building with a round plan in the middle of the courtyard was probably a Tykhe temple, as in the city of Side. Agora dates back to 4. century A.D.

Perge city has two major columned roads, one starting at the southern gate and extending (northwards) to the acropolis, and the other vertically intersecting the first road in the direction of east-west. These two roads divide the city into four principal zones. There are stoas along the both sides of this road with a width of 20m., and shops are aligned behind these stoas. The ground coverings of the stoas are embellished with mosaics. Also, the statues were decorating the sides of the road. There are two uncovered water canals along the central axis of the roads. These canals were barred with cross-walls at intervals of 7,5 m., both to facilitate the cleaning works and to adjust the water flow rate. The water was conveyed from the hills on the west down to the western gate. 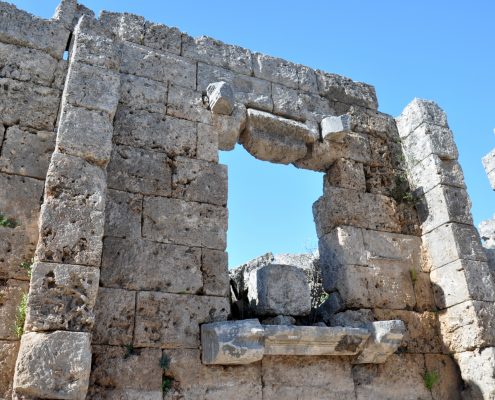 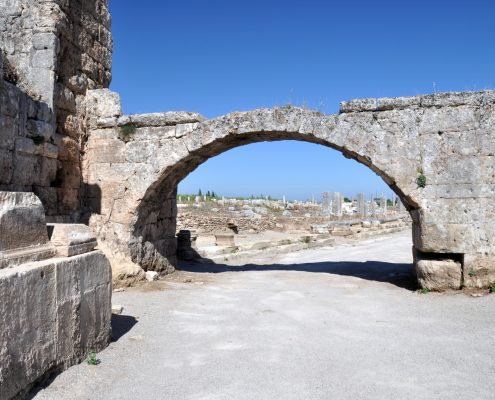 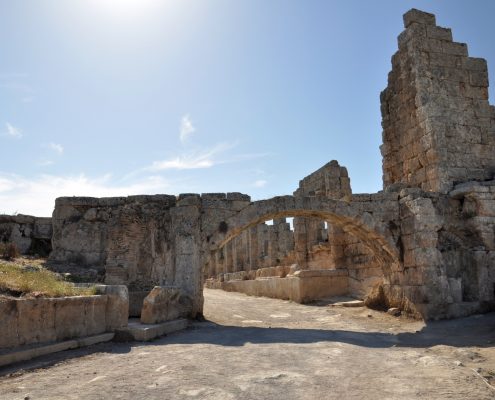 Occupying an open area with a square plan (76 x 76m.), this two floored and columned building has windows on its southern side, which overlook the road extending in front of it. It was constructed by C. Julius Cornutus and presented to the emperor Claudius (41-54 A.D.).

Although it is almost a certain fact that this hill on the north with a plain top was the first place of settlement, only the monuments of the Byzantine period were encountered. The city’s populace drew back to this hill, in order to be protected from the attacks by the bandits of Isauraia in 4. A.D. It was not needed to surround the hill with walls at that time, but its southern edge, the only edge which permits climbing, was strengthened and a gate was built. There is an arched large cistern with a rectangular plan on Acropolis hill, which were made of the collected materials. 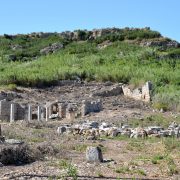 There are graves along the sides of this road, which is located on the western side of the city. There are various kinds ofgraves, from the graves like a temple to the simplest ones. The sarcophaguses unearthed on this road are today exhibited in Antalya Museum.
There is also a necropolis outside the Perge city, near the eastern gate. 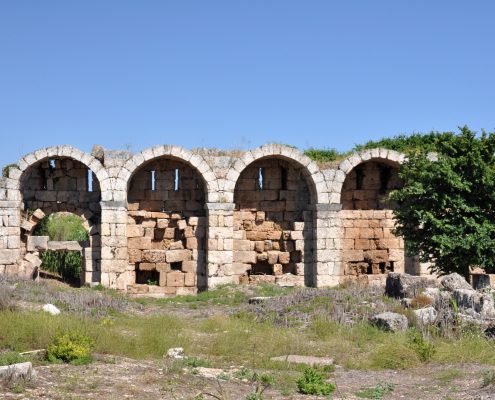 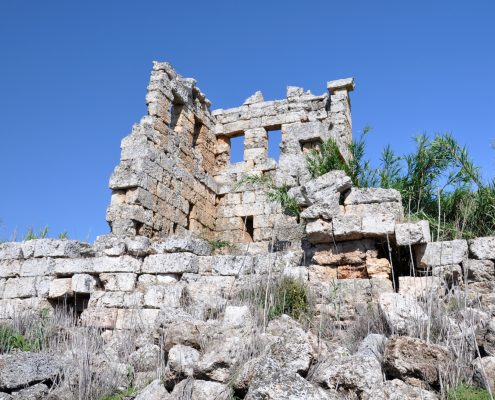 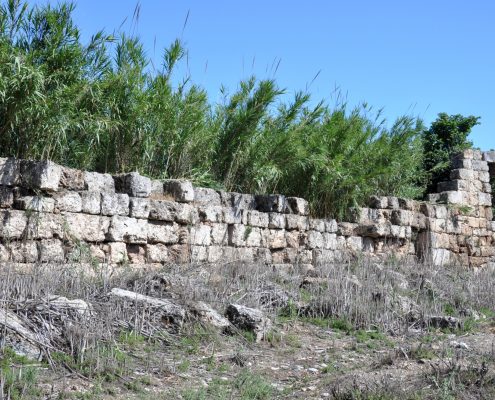 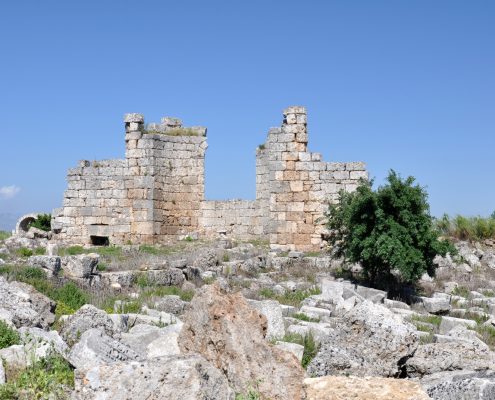 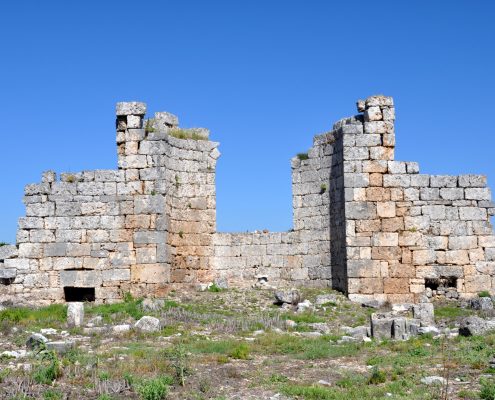 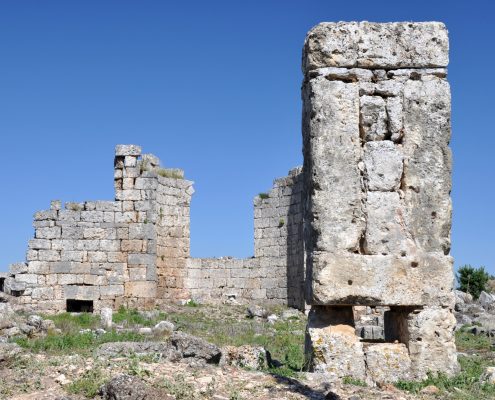 One of the two basilicas in Perge city is located at the southern gate, right next tot the agora. A 27 x 27 m. sized atrium on the front of basilica provides entry to the main interior. It is a typical basilica with two rows of eleven columns, which vertically divide it into three sections. It has a semi circular abscissa. The other basilica is located on the road extending in the direction of the south-north. Its size is 30 x 50 m. This building has two primary and one secondary naves.